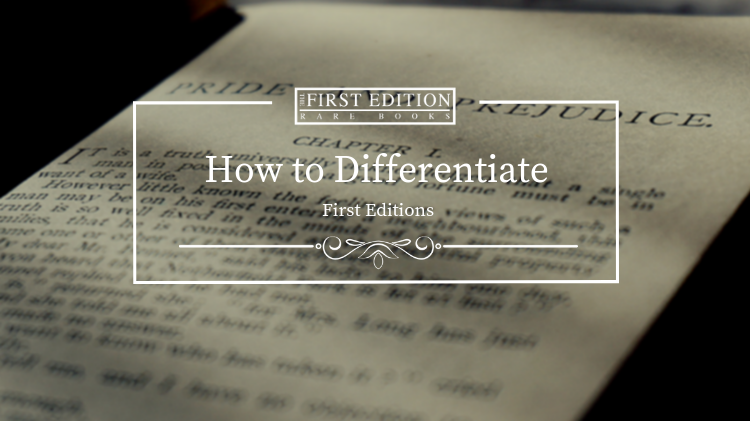 Seasoned collectors know the terminology around first editions. For the uninitiated, distinctions must be drawn to differentiate which “first edition” we’re speaking of. There’s more than one type of first edition, with vastly different valuations regardless of condition. As experts in first editions, rare, and signed books, we break down some of the differences and vocabulary to help make sure you know exactly what you are getting yourself into when purchasing or selling a first edition book.

When a book is published for the first time by anybody, anywhere, it is considered a first edition. However, there are several different types of first edition books, and the difference is essential in the book collecting world. These various types include a true first edition, a believed first, a first thus, a first book club, and an advanced reader copy.

True First is when a book is part of the very first printing with absolutely no questions surrounding its authenticity. Sometimes you will see this represented by the numbers 1/1 in its summary. This refers to its being in the first impression (sometimes called a reprint) as well. As only a certain number of books are printed at a time, the impression refers to which batch they were printed under. So while a first edition can mean any of the first printings where no changes were made to the copy or layout, you can have up to 20 or 30 impressions of a first edition.

Believed First is when you think that you have a first edition copy but do not have the hard the hard evidence to support it. It can be listed as a “believed first” along with reasoning as to why you think this to be true. More on points of issue later.

A first thus edition is the first of a book to be printed in a specific form. So for example, a book could be published in hardcover, but then if it is made into a paperback, it can be known as a first thus edition. The same goes if a new edition is created with edits or a new introduction, first illustrated, etc.

Books that are to be distributed through book clubs are often printed separately as a book club edition, often utilizing less expensive materials for the sake of wide distribution. Therefore, some books are first editions, but in specifically the book club print. They can often also be listed as BCA or BCE on the copyright page. One of the easiest distinguishing features of many BCE is a lack of pricing and barcodes. Biblio does a great job parsing out other identifying criteria for book club editions. Book club editions are often less valuable.

These normally have the same printing information as first editions but have a notice that they are advanced review copies on the cover. Typically, they are not quite as valuable as a true first.

There are a couple of different identifiers to help you determine if a book truly is the first edition:

Most publication details are listed on a copyright page, which can usually be found on the back of a title page. This should cover dates and details. If they are not located on this page, try the other pre-text pages, post-text pages, as well as the back cover. The dates are often listed in Roman numerals in older books to tell you exactly which edition or reprint it is.

For newer books, and especially those by American publishers, they might use what is called a number line. Essentially whatever number the line starts with is the number printing it is. (I.e., 4 5 6 7 8 9 is the fourth printing.) For additional succinct examples of number lines, Abe Books has a basic primer.

Sometimes publishers make it very easy for you and will print the words “First Edition” on one of the publication and/or pre-text and post-text pages.

Where better to learn about book collecting than from reading a book? A couple of our favorite resources are as follows:

Identification of First Editions by Bill McBride, now in its 7th edition, is an excellent resource for more information on authentically identifying the first editions. Another pocket guide McBride also publishes Points of Issue covers 1850 to the present. Points of issue help determine even within a first edition specific characteristics and flaws.

Modern Book Collecting by Robert Wilson is another useful resource to help you learn about the intricacies of first edition book collecting.

As David Bloom, head of Books, Maps, and Manuscripts at Freeman’s says, “Every publisher has a different way of doing things.”

Since there is no black and white method when it comes to identifying book editions, it is up to you to determine this correctly. These tools and resources will help you navigate this gray area of publishing before you sell to others or purchase for yourself.