A Dictionary Of Modern War 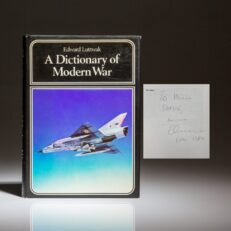 You're viewing: A Dictionary Of Modern War $75.00
Add to cart