A Discourse On The Aborigines Of The Valley Of The Ohio

First edition of A Discourse on the Aborigines of the Valley of the Ohio, by future President of the United States, William Henry Harrison.

Octavo, [1]-51pp, [fold-out map]. Bound in three quarter brown morocco, title in gilt on spine with raised bands. Top edge gilt. Light foxing to title page, even toning throughout the book. From the library of James Jerome Hill, CEO of the Great Northern Railway, with his bookplate on the front pastedown endpaper. Hill library marking on the title page. Fold-out map of the Ohio and Miami Rivers at rear, in near fine condition, short closed tear at fold. Map includes the Harrison property in North Bend, Ohio. (Howes H245) (Sabin 30571) The only published work from the 9th President of the United States, William Henry Harrison.

William Henry Harrison served as the governor of the Indiana Territory from 1801-1812. While governor, he negotiated numerous treaties with the native Americans in the area, greatly reducing their territory and stoking resentment against the United States. His antagonism culminated in the Battle of Tippecanoe in 1811 against the Shawnee Indians. This battle and the War of 1812 made Harrison a household name and propelled him to the White House in 1841. 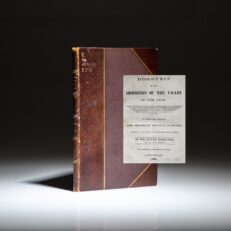 You're viewing: A Discourse On The Aborigines Of The Valley Of The Ohio $2,800.00
Add to cart