General John Bell Hood (1831-1879) served in the Confederate Army from 1861-1865. Hood fought in the Seven Days Battles, the Battle of Gettysburg and the Battle of Chickamauga. He suffered many injuries throughout his military career, leading to loss of function in his left arm and amputation of his right leg. This memoir by Hood was published posthumously and served to justify his actions during the war, particularly in response to accusations he considered false made by Generals Joseph E. Johnston and William Tecumseh Sherman. 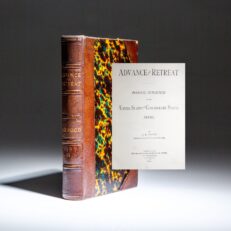