America Back On Track

A first edition, first printing of America Back On Track, inscribed by Senator Edward Kennedy to his brother’s Secretary of Defense, Robert McNamara.

Inscribed by Ted Kennedy to former Secretary of Defense Bob McNamara: “To Bob – With thanks for all your service to America. Ted Kennedy. July 06.”

An exceptional association copy between two giant political figures of the 20th Century. 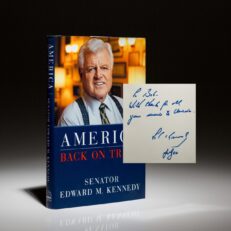