Octavo, 560pp. Illustrated paperback. Light shelf wear to both covers and edges of text block. Stated “First American Edition” on title page, with full number line. Signed by the author: “To Omar – The Americans need to understand that The Man is everybody’s last chance. Alan Hart.” Additional signature by Yasser Arafat himself, dated “2.7.90.”

An exceptionally scarce book signed by the Chairman of the Palestine Liberation Organization, Yasser Arafat.

Yasser Arafat served as the Chairman of the Palestine Liberation Organization (PLO) from 1969-2004 and President of the Palestinian National Authority from 1994-2004. Arafat received the 1994 Nobel Peace Prize, along with Yitzhak Rabin and Shimon Peres, for their work on the Oslo Accords. Arafat died in 2004. His legacy remains controversial, with Palestinians viewing him as a freedom fighter and Israelis believing him to be a terrorist. 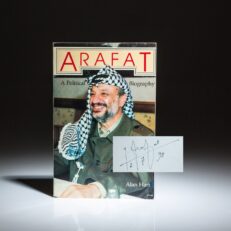