James G. Blight is a professor of foreign relations and film producer, notably the academy award-winning documentary titled The Fog of War: Eleven Lessons from the Life of Robert S. McNamara. Blight developed a new form of oral interview during his conversations with McNamara, called “critical oral history,” which relies on declassified documents and the personal insights of key decision makers to refine and enhance the historical understanding of a subject. Both co-authors of this book wrote extensively on the post-Cold War foreign relations of the United States. 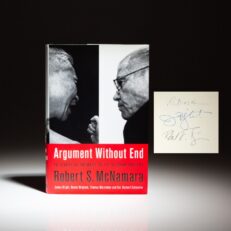