Breach of Faith: The Fall of Richard Nixon

The inscription reads: “For Gillian and Ted – with all my affection – Tedy White. Theodore H. White.”

Comments: Both White and Sorensen played vital roles in shaping the legacy of President John F. Kennedy, with Ted Sorensen being his chief speechwriter and Theodore White creating the legacy of Camelot after his death. Shortly after the funeral of President Kennedy, Mrs. Jackie Kennedy summoned the author [White] to Hyannis Port to write a series of articles about her husband for Life Magazine. In these articles, which were edited by Mrs. Kennedy, the famous phrase emerged “…for one brief shining moment that was known as Camelot.” 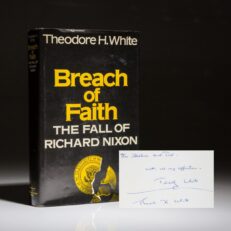 You're viewing: Breach of Faith: The Fall of Richard Nixon $575.00
Add to cart