Michael Collins (1930-2021) served as the command module pilot during the Apollo 11 mission. He served alongside Neil Armstrong and Buzz Aldrin but remained in orbit around the moon as the others explored the surface. He retired from NASA in 1970. He is one of 24 people who have flown to the moon. In retirement, he became the Director of the National Air and Space Museum. He died at age 90 in 2021. 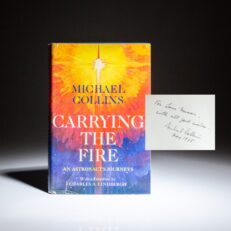