Collection of Kennedy Family Books: Profiles In Courage, Thirteen Days and Decisions for a Decade

Octavo, [three books], bound in handsome half red morocco, titles in gilt on spine, marbled boards and matching slipcase. Bound by P. Baillot of Paris. Includes the following books: Profiles in Courage by John F. Kennedy, the Memorial Edition, published in 1964; Thirteen Days by Robert F. Kennedy, second printing, published in 1969; Decisions for a Decade by Ted Kennedy, first edition, published in 1968. Profiles in Courage and Thirteen Days are inscribed by Eunice Kennedy Shriver. Inscriptions read: “Dear Millie – When we talk of the best of temperaments, kindness to others, good will, empowering and an adventurous spirit we speak of you, as do I. Thank you for all you kindness to the children + Sarge and me. A Happy Christmas and a year of great joy in Boston. Affectionately, Eunice Kennedy Shriver. Dec. 1972.” / “To Millie, With deep appreciation and much affection for your many good acts to all the children and me. Please come back and visit us. Best wishes. Eunice Kennedy Shriver.”

Eunice Kennedy Shriver founded the Special Olympics in 1868. She married Sargent Shriver in 1953, who would become an active member of the Kennedy administration and democratic nominee for vice president in 1972. She was awarded the Presidential Medal of Freedom in 1984 for her work on behalf of disabled children. She passed away in 2009. 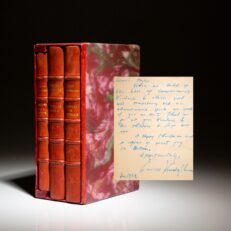 You're viewing: Collection of Kennedy Family Books: Profiles In Courage, Thirteen Days and Decisions for a Decade $1,800.00
Add to cart