Inscribed first edition of Columbia by Frederick Keppel, from the personal library of Eisenhower’s speech writer, Kevin McCann. Octavo, xvi, 297pp. Green cloth, title in gilt on sides and front cover. Top edge gilt. Some wear at hinge of spine, stable text block. Light wear from handling at edges of spine. Inscribed by Kevin McCann on the front free endpaper: “This book was bought by me in late 1947 that I might brief Dwight Eisenhower on what Columbia had been before he had its Presidency in mind. Kevin McCann. October 21, 1976.” Additional signature of Kevin McCann on title page. A unique historical association copy, with Eisenhower’s time as the president of Columbia University being met with criticism that he was an “absentee president.”

Comments: Kevin McCann met future President Dwight D. Eisenhower in 1946, while he was serving as Army Chief of Staff at the Pentagon. McCann followed General Eisenhower to Columbia University in 1948, then to Paris when Eisenhower was appointed the Supreme Allied Commander. In Paris, McCann served as special assistant to the General, assisting in the preparation of his influential memoirs, Crusade in Europe. McCann was appointed President of Defiance College in 1951, but soon took a leave of absence to follow Eisenhower to the White House as a speech writer. When President Eisenhower retired to Gettysburg, PA, McCann and his wife moved to the Eisenhower farm to serve as Special Assistant to the former president, helping to write his memoirs. 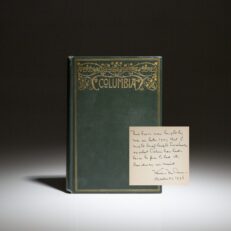