First Presentation of The Congressional Space Medal of Honor by the President of the United States, signed by President Jimmy Carter. Presentation occurred on October 1, 1978.

President Carter visited the Kennedy Space Center on October 1st, 1978, the 20th Anniversary of the establishment of NASA. The Congressional Space Medal of Honor was authorized in 1969, with President Carter being the first to bestow the honor. The recipients at this first presentation ceremony included: Neil A. Armstrong, Frank Borman, Charles Conrad, Jr., John H. Glenn, Virgil I. Grissom (deceased) and Alan B. Shepard. Since this first ceremony, a total of 28 astronauts have received the Space Medal of Honor, including posthumous honors for the crew of Apollo 1, the Space Shuttle Challenger and the Space Shuttle Columbia. 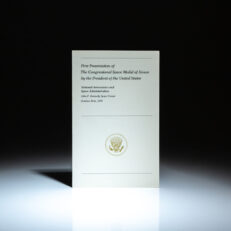 You're viewing: Congressional Space Medals of Honor $1,800.00
Add to cart