Dr. Houstoun’s Memoirs Of His Own Life-Time

× Ask a Question re: Dr. Houstoun’s Memoirs Of His Own Life-Time
SKU: 10314 Categories: African Exploration and Hunting, Travel and Exploration

First edition of Dr. Houstoun’s Memoirs Of His Own Life-Time, compiled by Jacob Bickerstaff, and published in 1747.

Octavo, [4], 435pp. Contemporary boards, rebound at spine with new cloth. New endpapers. Clean text, leaves worn at edges, free of any marks. (Sabin 33198) From Sabin: “A very curious book, by a Scotch adventurer, who was concerned in the Darien settlement. He was surgeon to the Assiento Company’s factories in America, and passed most of his life trading and negotiating in Central America and the Spanish Main. The author gives much information on Colonial Affairs, Civil, Military and Naval.” Only two copies are known to exist in OCLC.

From the title page, this work includes: An Account of The Scotch Settlement at Darien; The great Advantages accruing to Great Britain from an Incorporated Union of the Whole Island; The Rise and Progress of Royal African and Assiento Companies; The Rise and Fall of the grand South Sea Bubble, &c. in 1720; The Conduct of the Spaniards, and Manner of their Trade in the West Indies; The secret Expedition thither in 1740; Some Anecdotes of the Government of Jamaica, with the Characteristicks of its Inhabitants; The Importance of Cape-Breton to the British Nation; An Essay on Genius and Education. The autobiography of Doctor James Houstoun was called Memoirs of the Life and Travels of James Houstoun, M.D. (Formerly Physician and Surgeon-General to the Royal African Company’s Settlements in Africa, and late Surgeon to the Royal Assiento Company’s factories in America), From the Year 1690 to this Present Year 1747 (Sabin 33197). The Works of James Houstoun was published in London in 1753 (Sabin 33199). 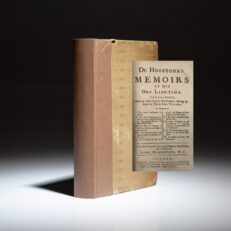