Dreams From My Father

The true first edition of Dreams From My Father, signed by Barack Obama.

Octavo, xi, 403pp. White boards, black cloth spine, title in gilt on spine. Stated “first edition” on copyright page with first state number line (98765432). Faint dust remnant along top edge of text block, no marks or evidence of handling. In publisher’s first state dust jacket, with $23.00 on front flap, in near fine condition, with just a touch of shelf wear. This copy is signed by Barack Obama on tipped-in signature page, originally found in the deluxe limited edition of A Promised Land.

As the name recognition of Barack Obama increased, Dreams From My Father was reissued by Crown Publishing in 2004. This is the true first edition, which only sold 8,000 copies then went out of print shortly after it was published in 1995. 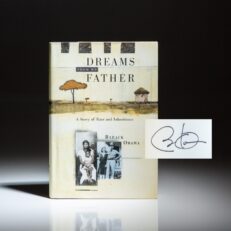