Letter from President Rutherford B. Hayes to a student, recommending this book for his study of the contested election of 1876. The letter was found neatly folded inside this reference book.

Thick octavo, 1087pp. Green hardcover. Title stamped in gilt on spine, lightly rubbed. Library stamps on title page, front and rear endpapers and bottom of text block. Free of any notes, but has been previously read. Housed in custom beige cloth clamshell case, title on spine over brown leather label, lined with linen. Letter from President Rutherford B. Hayes is housed in archival sleeve, affixed to interior of front cover. In the letter, dated October 31, 1890 at Pawtucket, R.I., the student asks: “Hon. Rutherford B. Hayes, Dear Sir. I am a student in history, and as a favor would you be kind enough to refer me to the book which would render the most valuable information in reference to the event at your election and the dispute of the Democrats or Tilden. Your obedient servant, G.eo. U. Tompers.” Response by President Hayes: “Answer: A Volume of 1087 pages printed by the Government in 1877 entitled ‘Count of Electoral Votes’ – ‘Proceedings of Congress and Electoral Commission.’ To be found in all large public libraries. Sincerely. Rutherford B. Hayes.” The book is not signed by Hayes. An exceptional historical association and honest feedback from a former president.

The 1876 election contest between Rutherford B. Hayes and Samuel J. Tilden is considered the most contentious election in history, resulting in an informal deal called the Compromise of 1877. The Democratic candidate, Tilden, won the popular vote and initially won the electoral college, but 20 votes from 4 states remained in contention. In an informal deal between Republicans and Democrats, in return for Hayes removing troops from the South and ending Reconstruction, Hayes was awarded the 20 outstanding electoral votes. President Hayes agreed to serve only one term. 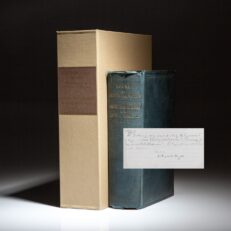