Ulric Sloane was “Ohio’s foremost criminal lawyer,” according to the Chillicothe Gazette and a number of other Ohio newspapers in the late 19th century. Upon his passing on January 21, 1912, Sloane was recognized as one of the most successful criminal law experts in the country. He appeared in more than 200 murder cases throughout his career, with only one client sentenced to death in 1905. 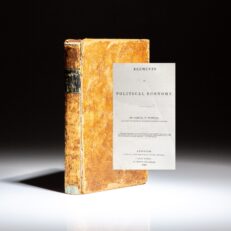 You're viewing: Elements Of Political Economy. $225.00
Add to cart