Guest of the Emperor

Guest of the Emperor, signed by the author, Lee K. Bergee and Frank O. Promnitz.

United States Marine, Frank O. Promnitz, fought in the battles of Bataan and Corregidor but was captured by the Japanese. He survived the Bataan Death March in 1942. He spent three years in various Japanese POW camps. He was liberated in Hitachi, Japan and returned to the United States. The author, Lee K. Bergee, also served in the Marines. 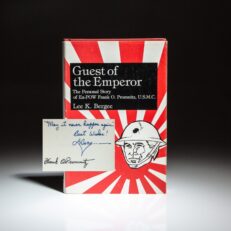