Hunting With The Eskimos

First British edition of Hunting with the Eskimos by Harry Whitney.

Harry Whitney (1873-1936) was a wealthy American sportsman, who spent a year hunting game in Greenland with the help of the local Inuit. Hunting with the Eskimos contains numerous photographs taken by the author as well as reproductions of Inuit drawings. During Whitney’s trip to the North, he encountered both Robert Peary and Frederick Cook on their quest to reach the North Pole. Whitney would later be drawn into the controversy over which man reached the Pole first. 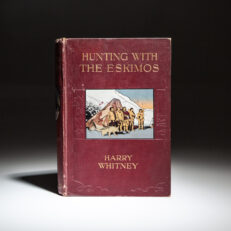 You're viewing: Hunting With The Eskimos $225.00
Add to cart