In the National Interest

First edition of In the National Interest by Marvin Kalb and Ted Koppel, inscribed to William Safire. Octavo, 371pp. Blue hardcover, title in gilt on spine over black cloth. First edition, first printing with full number line on copyright page. In publisher’s dust jacket, retail price on front flap, light shelf wear, overall near fine. Inscribed by Marvin Kalb: “To Bill – I just want you to move over. here off the list – Best, Marvin Kalb.” Additional signature from Ted Koppel on half title.

Comments: The inscription by Marvin Kalb is likely a reference to the “Nixon Enemies List,” which Kalb joined due to his coverage of the Watergate scandal. The recipient of this book, William Safire, was a Pulitzer Prize winning conservative columnist for the New York Times. He was a frequent guest on Meet The Press, describing himself as the voice of “libertarian conservatives.” Before joining the New York Times, Safire served as a presidential speechwriter for President Richard Nixon and Vice President Spiro Agnew. 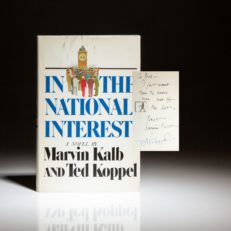 You're viewing: In the National Interest $195.00
Add to cart