First edition of Ismailia: A Narrative of the Expedition to Central Africa for the Suppression of the Slave Trade.

A scarce account of Sir Samuel W. Baker’s voyage to Central Africa to suppress the slave trade. Along with a force of 1700 men from the Khedive Authority, Baker took control of the Sudanese region of southern Egypt. He fought numerous battles with slave traders, and ultimately created a stable trade region in Equatoria. 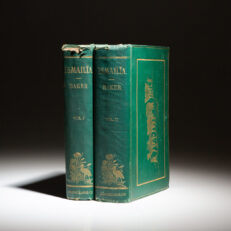