A collection of signed documents from the 1984 Presidential Campaign of Senator John Glenn.

Three signed documents, housed in custom blue cloth folio, title on cover. First item is a Traveling Party Press Card, signed by John Glenn in black marker. The other two items are invitations to fundraisers in California, both from 1983, signed by Senator John Glenn. 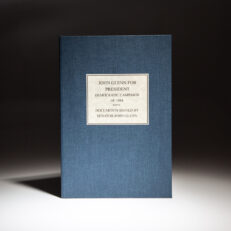 You're viewing: John Glenn for President $375.00
Add to cart