Kansas, Utah, And The Dred Scott Decision, Remarks of Hon. Stephen A. Douglas, delivered in the State House at Springfield, Illinois, on 12th of June, 1857. Octavo, 8pp. Bound at spine. Occasional foxing, some wear to leaf ends. No loss of text. (Byrd, 2633) Not the better known copy printed in Chicago (Ante-Fire Imprints, 250)

Stephen A. Douglas (1813-1861) was a democratic senator from Illinois, who ran against Lincoln in 1858 for the Senate seat from Illinois. Their eloquent debates, which would be published in 1860 as the Lincoln-Douglas Debates would help launch the presidential candidacy of Lincoln against Douglas in 1860. During his time in the Senate, Douglas advocated for the principle of popular sovereignty, which allowed new western territories to decide for themselves if slavery would be permitted within their borders. In 1850, he advocated for the Compromise of 1850, which aimed to keep an equal number of slave and non-slave holding states. In 1854, he passed the Kansas-Nebraska Act, which repealed the Missouri Compromise of 1820, created the new territories of Kansas and Nebraska, and followed his principle of popular sovereignty, which allowed the new territories to decide for themselves if they wished to hold slaves. It had the opposite effect on the nation, stoking tensions in the north and solidifying the Republican party as the antislavery party. In the election of 1860, the democratic party split between his candidacy and John C. Breckinridge of Kentucky. As the Civil War broke out, Douglas rallied support for the Union, but he died in 1861. 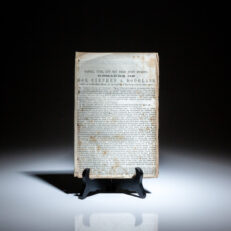 You're viewing: Kansas, Utah, And The Dred Scott Decision $225.00
Add to cart