Inscription reads: “Sept. 1987. Kennebunkport, Maine. To Bob Boilard, Here’s a glimpse into my past – not enough emphasis though on the joy of fishing for the “Blues” – With friendship and love from all Bushes as I leave Kennebunkport today to “Look Forward” – George Bush.” Bush would announce his candidacy for President of the United States in October, 1987.

Bob Boilard was a longtime friend and fishing partner of President George H.W. Bush. Mr. Boilard wrote that he never spoke about politics with President Bush, but kept topics to family, friends, fishing and Maine. In a letter to Bob Boilard featured in “All The Best, George Bush” dated 2/24/88, Vice President Bush says “Bob, I’m going to win, but Ill promise you one thing – it won’t affect our fishing together. Life is about friends and values. You are my friend. Keep your fingers crossed. George Bush.” 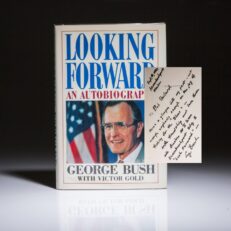