Octavo, xii, 270pp. Gilt title on spine and signature on cover. Maroon cloth bindings. Stated “first edition” on copyright page. Dust jacket in near fine condition, with $18.95 on front flap, light edge wear at top edge of spine. Book is inscribed on limitation page, which reads: “This signed edition of Looking Forward has been specially produced for friends of the author and the publisher. George Bush.” There are no records of this unique limited edition coming to market in the past. An excellent copy honoring the late President George H.W. Bush.

Looking Forward was written by Vice President Bush before he embarked on his successful campaign for President in 1988. Looking Forward covers his career, from a navy pilot during WWII, through his years as Ambassador to China, Chairman of the Republican National Committee, Director of the C.I.A. and finally to the 1980 presidential race. George Bush would serve as the Vice President for Ronald Reagan from 1981-1989 and one term as President from 1989-1993. 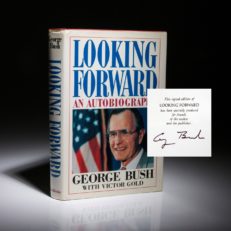