James McCourt (b. 1941) is an author and graduate of Yale School of Drama. Mawrdew Czgowchwz is McCourt’s debut piece and his best-known work, centering around the life of a fictional opera diva. John Hollander (1929-2013) was a poet who also served as the Sterling Professor Emeritus of English at Yale University at the time of his passing. Hollander wrote a myriad of works, notably receiving the Bollingen Prize for his technical masterpiece “Powers of Thirteen.” 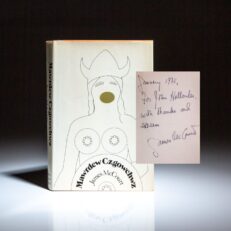