Printed on vellum. Size: 17.75 by 14.5 inches. Housed in acid-free protective mylar covers. Signatures are slightly faded, with Jefferson’s slightly obscured by a fold in the document. Other writing faded, with areas of toning and light spotting. Signed by President Thomas Jefferson and Secretary of War, Henry Dearborn.

Provenance: From the estate of Charles Boyd Coleman, Jr of Chattanooga, TN, who was a decedent of Annette Maria Dearborn Boyd, daughter of Greenleaf Dearborn (1786-1846) and great granddaughter of Henry Dearborn (1751-1829).

General Henry Dearborn was a revolutionary war general, serving under Benedict Arnold and later General George Washington. He was present at the surrender at Yorktown. After the war, he has appointed Secretary of War by Thomas Jefferson from 1801-1809. His final military assignment came during the War of 1812, where he served as a Commanding General. He was re-nominated for Secretary of War by President James Madison, but his nomination was rejected by the Senate. Dearborn, Michigan and Fort Dearborn are named in his honor. 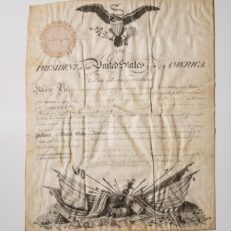