Inscribed copy of Mission to Earth: Landsat Views the World from President Jimmy Carter to the Prime Minister of New Zealand, Robert Muldoon.

This book was a gift to New Zealand Prime Minister Robert Muldoon upon his state visit to the White House November 8-11, 1977. The visit by Muldoon was part of a 3-week tour of the United States aimed at boosting agricultural trade with the United States. The trip was almost canceled due to comments from Muldoon earlier in the year, when he noted that “anybody can become President of the United States, even somebody who has a brother who pumps gasoline,” referring to Billy Carter, the brother of President Carter. It took an intervention by Secretary of State Cyrus Vance and a threat to “snub Muldoon” to ease the uproar. Muldoon served as Prime Minister until 1984. 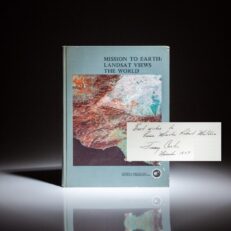