Octavo, [8], 386pp. Purple cloth, gilt title on spine. Top edge gilt, uncut edges. Housed in publisher’s original purple clamshell case, matching limitation number on cover. Also includes a laid-in dedication card from the publisher, offering to have the book personalized by Mrs. Wilson if desired. Published as a limited edition of 1001 signed copies, this being number 702 of 1001. An exceptionally scarce set, complete with the publisher’s clamshell box and dedication card.

Edith Bolling Wilson was the second wife of Woodrow Wilson, marrying in 1915 during his first term as president. After President Wilson suffered a stroke, she took an active role in managing his schedule and flow of communications. In this memoir, she claims that she played a role in the “stewardship” of his administration, while other historians have asserted that she took control of the Executive Branch of government. 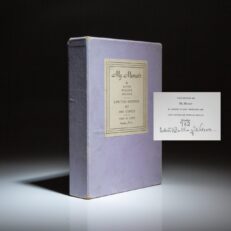