The Presidential Edition of No More Vietnams, signed by President Richard Nixon.

Octavo, 240pp. Brown leather, gilt lettering on spine, gilt edges. Buckram cloth clamshell box with “Presidential Edition” in gilt on front flap, silk tie-down. Minor scuffing to leather cover of book from slipcase insert, which is typical with this edition. The book has never been read.

From a limited edition printing of 200 copies, this being number 38, signed by President Nixon.

This limited edition of No More Vietnams is known as the Presidential Edition, not to be confused with the Deluxe Limited Edition, which is bound in blue cloth. No More Vietnams is a retrospective of President Nixon’s experience with the Vietnam War. It was a defense of his policies and tactics to end the war, ten years after the last troops were withdrawn under President Ford’s administration. 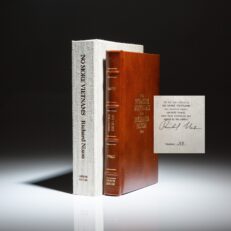