First edition of Numbers and Losses in the Civil War in America by Thomas L. Livermore, the most-cited statistical analysis of the Civil War. Octavo, iv, [errata], [1], 150pp. Blue cloth, title in gilt on spine. Gray endpapers. Clean text throughout. Lacking scarce dust jacket. (Eicher 850). This work was reprinted in 1957 by Indiana University Press and revised in 1986 by Ken Bandy and Steve Ward.

Comments: For a turn of the century analysis, the troop estimates from Thomas Livermore hold up against current troop strength analysis. His estimates doubled the estimated number of enlistment’s claimed by Jubal Early, writing for the Southern Historical Society Papers in the last 1800s. He accurately estimated the Federal troop strength of 2.9 Million and the Confederate Army strength of 1.5 million. This work began as a paper by the Military Historical Society of Massachusetts in 1897, based on statistical data from Kennedy’s Population of the United States (1860). 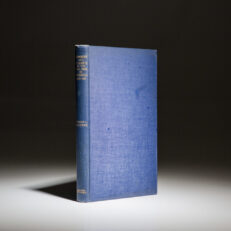