1908 Campaign Poster for William H. Taft, titled “Our Next President,” with portrait by The Moffett Studio of Chicago.

After four years as the Secretary of War, William H. Taft was the natural successor to President Theodore Roosevelt for the Republican nomination. Taft won the nomination and faced William Jennings Bryan in the general election. He won the presidency by a comfortable margin, but would only serve one term as president. 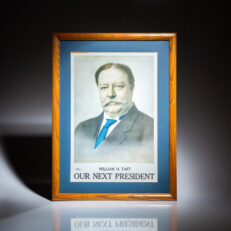 You're viewing: Our Next President – William H. Taft Campaign Poster $675.00
Add to cart