Handwritten letter from Governor Jimmy Carter to Georgia Representative Andrew Young, while Carter was building a national base to launch a presidential run.

Two pages, on Carter letterhead, measures 5.5″ x 8.5″. Paperclip mark along top edge. The letter is dated July 11th, 1975, when Jimmy Carter was considering a run for President and looking to expand his network outside of Georgia. Full letter reads: “I enjoyed being with you & really appreciate the tremendous help you gave me on my trip to Washington. Just being with you was a fine boost. I was able to see about 50 members of Congress (and their staffs) & the visits were all pleasant & productive. My favorite was Shirley Chisholm, who gave me some excellent advice & encouragement. Tomorrow morning I’m off to Missouri & Illinois. Thanks again for your friendship. Jimmy.” An exceptional letter between a future president and his future Ambassador to the United Nations.

Andrew Young (b. 1932) represented Georgia’s 5th Congressional District in Congress when this letter was written. He would be appointed by President Jimmy Carter to serve as the United States Ambassador to the United Nations, the first African American to serve in this post, and would later serve as the 55th Mayor of Atlanta. He began his career as a pastor in Alabama and eventually became associated with the Southern Christian Leadership Conference. He was a colleague and friend to Martin Luther King, Jr., helping to strategize the Civil Rights Campaigns across the South. 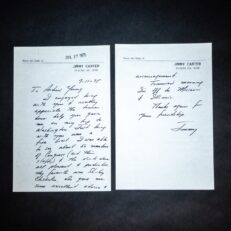 You're viewing: Personal Letter From Jimmy Carter to Andrew Young $2,800.00
Add to cart