Comments: The recipient of this book, Irena Wyckoff, was the secretary for Max Perkins. Perkins is credited with discovering some of the most influential authors of the 20th Century, including F. Scott Fitzgerald, Majorie Kinnan Rawlings, Thomas Wolfe and Ernest Hemingway. 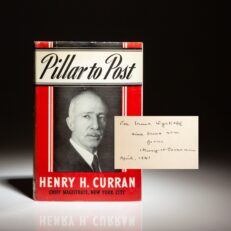