Population Roads to Peace or War

Octavo, [iv], 138pp. Red cloth, title printed on cover. No additional printings mentioned on copyright page. In publisher’s scarce dust jacket, shelfwear with some archival repairs, previous ownership sticker on front flap. Inscribed by the author: “To my good friend and old colleague, S. Wayne Evans, with best wishes in the “Atomic Era,” from the author, Guy I. Burch.”

“As a voting participant in helping to solve the many intricate problems of our complex civilization, a dull and backward individual is almost as helpless as an idiot. In fact, he may be more dangerous to democratic institutions, because he is easily commanded by demagogues and dictators.” The author of this scarce work, Guy Irving Burch, was the head of the Population Reference Bureau until his death in 1951. Through his research and writing he cautioned that the American electorate was declining in educational standards, which threatened the foundations of our democracy. In the 1930s he worked with Margaret Sanger to pass legislation allowing for birth control, but some believe his motives were more about population control than the reproductive rights of women. 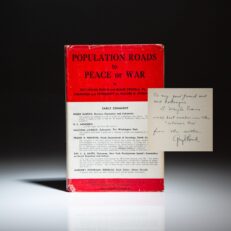 You're viewing: Population Roads to Peace or War $250.00
Add to cart