Full color poster, measures roughly 38″ x 50″. Four identical posters in lot, all near fine condition. All show some wear and handling at edges, with a small closed tear on the left side of one poster. A few small stains on versos, not affecting image on front.

President Gerald Ford (1913-2006) was wary of running for president in 1976 after taking office in 1974 due to President Nixon’s resignation. He beat fellow party member Ronald Reagan for the Republican nomination, but ultimately lost to Democratic nominee Governor Jimmy Carter. Despite the political challenges and controversy of the Watergate scandal and Vietnam War, Ford and his campaign team spent the three months leading up to the election in a close contest, losing by just two percentage points to Governor Carter. 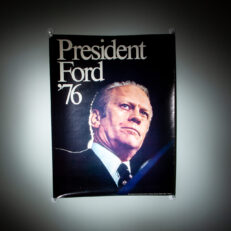