Presidential Appointment of Ambassador Edward J. Perkins as a Member of the Advisory Committee for Trade Policy and Negotiations, signed by President George W. Bush and Secretary of State Condoleezza Rice. Document is dated March 31, 2005.

Black frame, maroon matte. Measures 28″ x 24″. Great Seal of the United States affixed to lower left corner of document. This appointment was Perkins’ second of three 2-year assignments to the Advisory Committee for Trade and Policy, with all three appointments during the George W. Bush administration. The purpose of the Advisory Committee for Trade Policy is to provide the U.S. Trade Representative with policy advice on matters concerning United States trade agreements and operation of those agreements. Ambassador Perkins joined a distinguished list of 32 individuals, all serving 2-year terms. 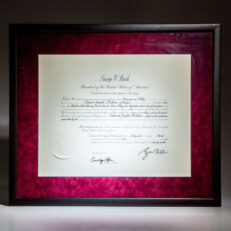