This framed proclamation measures 24″ x 20″. It is signed by Acting Secretary of State, Warren Christopher and in autopen by President Jimmy Carter. Includes a laid-in executive order, signed by President Carter. Embossed seal of the United States affixed to lower left corner. A fine example.

Sol M. Linowitz (1913-2005) was an American diplomat, lawyer and chairman of Xerox Corporation. He helped to negotiate the return of the Panama Canal to Panama, at the direction of President Carter. In 1998, he was awarded the Presidential Medal of Freedom by President Clinton. He was the author of two books: The Making of a Public Man: A Memoir (1985) and The Betrayed Profession (1994). He died in 2005. 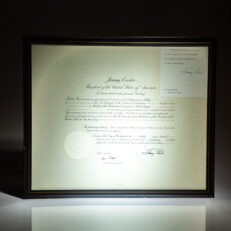