Inscribed by the commander: “For Dick Miller, With all good wishes. Roy O. Stratton. December 1, 1950.”

The Rice Paddy Navy was a specialized group of naval personnel who operated behind Japanese lines during WWII. They were officially known as the Sino-American Cooperative Organization (SACO), commanded by Rear Admiral Milton E. Miles. They operated in conjunction with the Chinese Army and the Chinese Nationalist Government to mutually collect intelligence on Japanese operations and report back to the Office of Strategic Services (OSS). The OSS was the precursor to the modern day CIA. 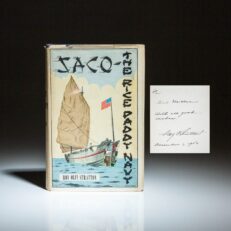