Octavo, xvi, [2], 460pp. Gray cloth, gilt title over blue on spine and front cover. Stated “first edition” on copyright page. Light toning to spine, shelf wear to cloth on back panel. In publisher’s first state dust jacket, with $5.95 price on front flap, chipping along bottom edge, short closed tear to rear panel, a very good example. Inscribed on the front free endpaper: “To Bryce Harlow, for whose loyal friendship in victory and defeat I shall always be grateful. from Dick Nixon.”

Bryce N. Harlow (1916 – 1987) was a veteran of Washington DC, serving as an administrative assistant, speechwriter and deputy assistant for congressional affairs in the Eisenhower Administration. During the campaign of 1960, he was a speechwriter for Vice President Nixon’s unsuccessful presidential campaign. With Nixon’s election In 1968, Harlow was the first presidential appointment of the new administration, serving as a congressional liaison. Harlow was awarded the Presidential Medal of Freedom in 1981 by President Ronald Reagan. He died in 1987. Six Crises is the first book written by then former Vice President Richard Nixon. It outlines six major political issues during his career. It went a long way towards rehabilitating Nixon’s image after his presidential election defeat of 1960. 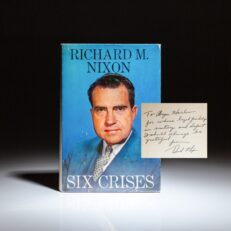