The Spirit of St. Louis was first published in 1953 and won the Pulitzer Prize for Autobiography in 1954. Lindbergh’s first account of the journey, titled “We,” was published shortly after he made the historic flight in 1927. Lindbergh was never happy with this account of his journey, so he wrote Of Flight and Life, which covered his life in more detail. This book was ghost written by his wife, Anne Morrow Lindbergh, and its success is widely attributed to her writing skills. 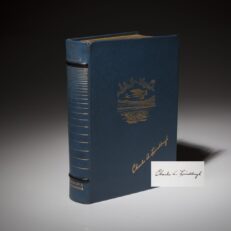