Storm of Steel is the World War I memoir of German officer Ernst Junger, detailing his experiences on the Western Front. It was first printed in German in 1920, making it one of the first personal accounts of the war, titled In Storms of Steel: from the diary of a Shock Troop Commander, Ernst Junger, War Volunteer, and subsequently Lieutenant in the Rifle Regiment of Prince Albrecht of Prussia. This first American edition was translated by Basil Creighton and published in 1929. The dust jacket was designed by A.R. Tobias. 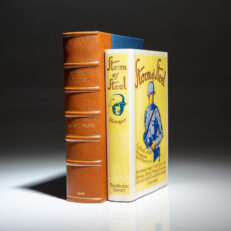