That Day With God – Foreword by Richard Cardinal Cushing

Octavo, xiv, 213pp. Black cloth, title in gilt on spine. Stated “first edition” on copyright page. In publishers dust jacket, $4.95 on front flap, very good with closed tear on back panel. From the personal library of Rabbi Stanley Rabinowitz, whose sermon is featured in the book. The book is signed by Rabbi Rabinowitz on the half title. 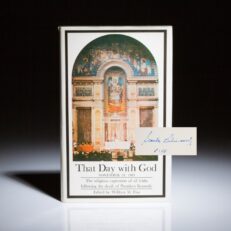 You're viewing: That Day With God – Foreword by Richard Cardinal Cushing $85.00
Add to cart