The Atlantic Charter was a joint statement released on August 14, 1941 by the United States and the United Kingdom to share the vision they had for the world after the end of World War II. Roosevelt and Churchill agreed upon the listed items at the Atlantic Conference held in Newfoundland between August 9-12 of 1941. The Charter influenced many international agreements and events postwar, including the ending of the British Empire, the creation of NATO, and improvements to international trade through the General Agreement on Tariffs and Trade. 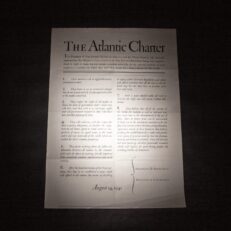