Octavo, xv, [3], 104pp. Publisher’s navy blue cloth, title stamped in silver on spine. Book appears unread. Stated “first edition” on copyright page. In the publisher’s cloth slipcase, title on label affixed to side panel, a near fine example. This is a limited edition publication of 360 copies, signed by John Fowles and Harold Pinter. This is number 12 of 350 copies for sale.

This screenplay was used for the movie by the same title, released in 1981. John Fowles was the author of the original novel and Harold Pinter wrote the screenplay. The film was nominated for 5 academy awards, including Best Adapted Screenplay. 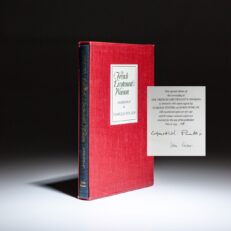 You're viewing: The French Lieutenant’s Woman $425.00
Add to cart