First edition of The Historical Novel, a compilation of articles about Herman Wouk, with laid-in letter from Herman Wouk to New York Times columnist, Bill Safire.

Paperback, x, 118pp. Original wrappers, near fine condition. This work includes an article by William Safire, titled “The Sense of Scene.” Letter on Herman Wouk letterhead, dated 22 April 04. In this letter Wouk says that he “won’t waste words.” He thanks Safire for his friendship and offers him this copy of the Symposium Book. 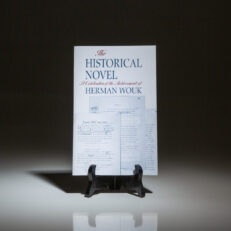