Complete set of The Liberation Trilogy by Rick Atkinson, all first edition, first printings, signed by the author.

Thick octavo, [three volumes]. All hardcovers, title stamped in gilt on spines, author’s signature in gilt on covers. All three volumes stated “first edition,” with full number line. All three volumes appear unread. In the publisher’s fine dust jackets, retail price on front flap. Each volume is signed on the title page by the author and dated. An exceptional collection.

The Liberation Trilogy by Rick Atkinson follows the United States’ buildup and involvement in World War II. The first volume, An Army at Dawn: The War in North Africa, 1942-1943, was first published by Henry Holt and Company in 2002. It won the Pulitzer Prize for History in 2003. The other two volumes, The Day of Battle: The War in Sicily and Italy, 1943-1944 and The Guns at Last Light: The War in Western Europe, 1944-1945, were both New York Times bestsellers. 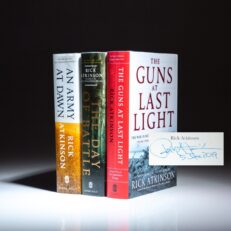 You're viewing: The Liberation Trilogy $850.00
Add to cart