First edition of The Memoirs of Richard Nixon, inscribed by former President Nixon to Admiral John S. McCain, Jr., his Commander-in-Chief of Pacific Forces during the Vietnam War.

Thick octavo, [xii], 1120pp. Blue cloth, title in gilt on spine. Stated “first printing” on copyright page. Light wear from handling, free of any marks or notations. Laid in newspaper clipping, offsetting to endpapers. In the publisher’s dust jacket, $19.95 on front flap, light shelf wear, bright colors, very good example. Inscribed on the half-title: “To Admiral John S. McCain Jr. / With deep appreciation for his friendship and his years of superb service to the nation. / from Richard Nixon / 5-26-78.” An exceptional association copy.

In the story of the McCains we see the greatness of America. …men who have devoted their lives to this country… so that America could play its role of being the guardian of peace in the world. – Comments by President Nixon at the retirement ceremony of Admiral John S. McCain, Jr., September 1972. Admiral John McCain (1911-1981) served in the United States Navy for 45 years. He was the son of Admiral John S. McCain, Sr., a four-star admiral who commanded South Pacific aircraft operations in World War II, and the father of Senator John McCain. During the Vietnam War, Admiral McCain was Commander-in-Chief of all U.S. forces in the Vietnam theater and an ardent supporter of the Vietnamization policy of President Nixon. McCain retired in 1972 and died of a heart attack in 1981. He is buried in Arlington National Cemetery. 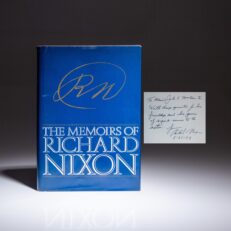