Octavo, xi, [1], 223pp. Hardcover, glossy illustrated boards with title printed on spine and cover. Top edge of spine bumped, but overall a nice copy of this history of the “Original” or “Eastern” Iron Brigade which was made up primarily of New York troops during the Civil War. Not to be confused with General John Gibbon’s Black Hat Brigade, which was also known as the Iron Brigade of the West, as it was made up of Western troops. 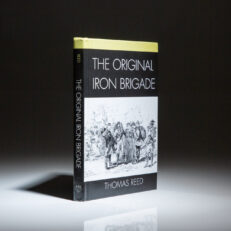 You're viewing: The Original Iron Brigade $125.00
Add to cart