This is the most desirable of the limited edition printings of The Real War, with the leather binding and stated limitation. This book contends that the USSR and the United States have been engaged in WWIII since the end of WWII. Actions like allowing the Nazi regime to crush Polish Resistance movements and other “peaceful geopolitical actions” have served to advance the communist agenda in all areas of the world. 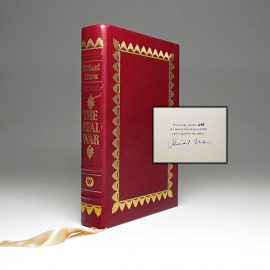