Treaty with the Republic of Peru on Penal Sentences

Treaty ratification between the United States and the Republic of Peru regarding Penal Sentences, signed by President Jimmy Carter and Secretary of State Cyrus Vance on April 3, 1980.

Includes embossed Seal of the United States, with silk ribbon. Light foxing across all three leaves. Measures 9.75″ x 14″. Blue cardboard folder, light shelf wear to covers, previous fold along center line. An exceptionally unique piece, with no record of other treaty ratifications similar to this appearing on the market. Provenance: from a private collection, with close ties to the Carter Family of Plains, GA.

The treaty between the United States and the Republic of Peru regarding penal sentences would allow citizens of both countries, who had been convicted in the courts of the other country, to serve their terms in their home country. It was similar to other treaties in place with Bolivia, Canada and Mexico. The treaty was signed in Washington on July 6th, 1979 and transmitted to the Senate for their advice and consent on December 20th, 1979. It was ratified on March 25th, 1980, and this document was signed by Secretary of State Cyrus Vance and President Jimmy Carter a week later. 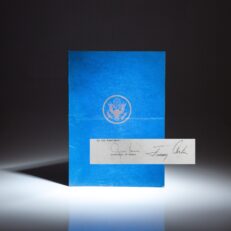 You're viewing: Treaty with the Republic of Peru on Penal Sentences $2,800.00
Add to cart